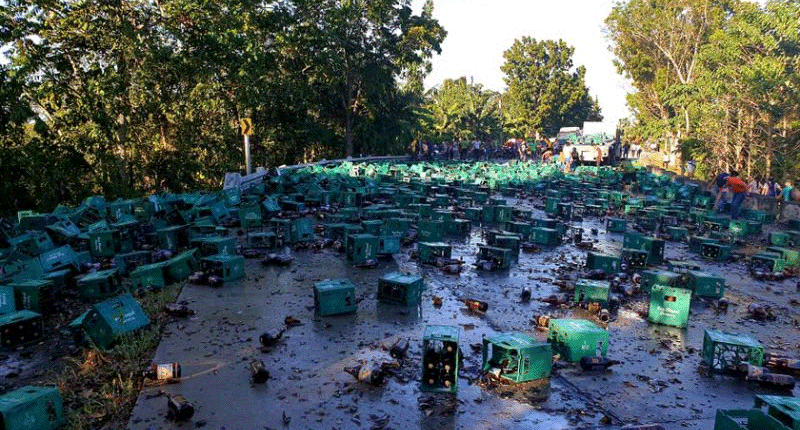 The best and worst workplace accidents caught on camera

Take a break from the monotony of your day with some of the best and worst workplace accidents caught on camera. From a simple being launched across the warehouse by some lifting equipment to losing a truckload of stock on a drop.

In absolutely no order of importance or severity we bring to you some of our favourite incidents from around the globe!

A golden oldie where the subject of the video was lucky to come out almost completely unharmed. Whilst unloading a lorry using a pallet truck this gentlemen is catapulted through the air and to the ground when he miscalculates the length of the tail-lift.

With mishaps like the one below it is difficult to pinpoint where the fault lies. Is it dodgy racking construction or a complete lack of concentration on behalf of the reach truck operator? We’ll let you decide.

Working with heights poses risks regardless of what the work involves. When you’re adjusting the weight and centre of gravity dramatically on the structure supporting you, the slightest mistake can have the biggest effects. Here is one of the first workplace accidents caught on camera to be posted on YouTube.

Based on the reaction of the workman involved it’s highly unlikely that this was supposed to happen. Regardless of the dangers involved with a 115,000 volt accident the visuals and sound created are nothing short of fascinating.

We haven’t been able to figure out exactly how the car managed to get itself upside down. We have however noticed why it ended up rolling down the hill.

No video for this one, just a picture of this tragic incident that took place in the Philippines during January 2019. Not one for the faint of heart, especially the beer lovers. No life lost, just something that many would consider most precious for us!

A wild ride for window cleaners

Up there with some of the most daunting jobs around. Skyscraper window cleaning is not for everyone but it’s a widely famous job choice known for it’s dizzying heights and spectacular views. In this video we see one of your not so typical workplace accidents where two people in a suspended platform swing wildly out of control during their shift.

The Hudson River plane crash seen in the movie “Sully”

As far as workplace accidents go this has to be in the top ten for reaching global fame and recognition. US Airways Flight 1549 took off from LaGuardia Airport in New York City on January 15th 2009. The Airbus A320 struck a flock of geese shortly after taking off rendering both of the engines useless. A reduction in the engine’s power forced pilots Captain Chesley “Sully” Sullenberger and First Officer Jeff Skiles to manoeuvre the aircraft into the Hudson River.

Due to a tremendous level of skill from both in charge of the plane all 155 passengers on board and crew survived and were rescued by nearby boats. Few serious injuries were sustained.

There is quite the debate over who was driving the vehicle that hit this poor unsuspecting crew member. Some say it is Michael Schumacher, others argue that Kimi Raikkonen is to blame. Either way, here is one of the most comedic workplace accidents online where fortunately the only thing hurt was his pride.

Set up your workspace properly

This gentleman thought he was ahead of the game when cutting this large piece of ply whilst resting atop it. By the time he realised his mistake it was too late! Luckily a colleague was nearby to come to the rescue.

Concrete machine goes out of control

This is one of my personal all time favourites. Not only is it hilarious but the duration simply adds to the comedic value. Easily to this day one of the most watched workplace accidents online.

Crane topples over on construction site

Of all places for something like this to happen, a large body of water like a river was probably the worst. It appears as though the ground beneath the crane collapsed causing it to loose balance and topple into the river. From the video it looks as though nobody was seriously harmed including the driver.

On the 22nd October 1895 the Granville to Paris express overran its line resulting in the Montparnasse Derailment. The train line wasn’t the only thing this locomotive overran, it was also late pulling into the station by a few minutes.

With the train driver attempting to make up for lost time he entered the station too fast and the airbrake failed to bring it to a standstill in time. Unfortunately a woman was killed by falling materials as the train tore through the wall and landing on the street outside.