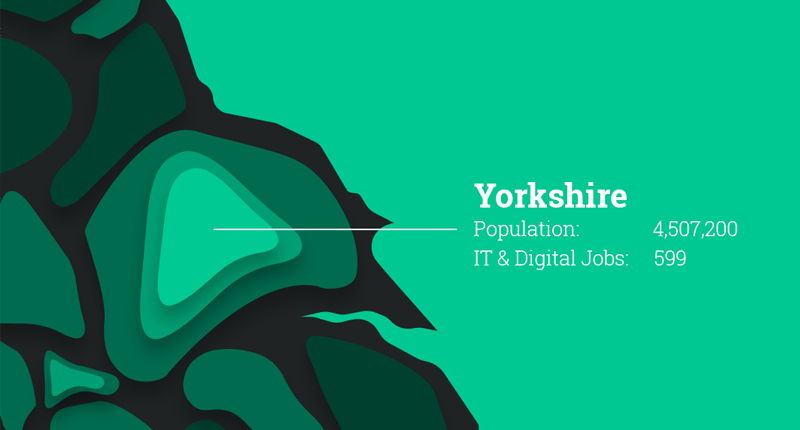 Last week we published our first in a series of research into live engineering jobs across the country. With stats collected from the CV Library website we were able to figure out which counties of England are engineering hot spots at this time of the year and which may not be worth moving to if pursuing a career in the sector. This week we move into our other specialist sector of IT & Digital. Again using stats from CV Library we bring you a heatmap showing the peaks and troughs of IT & tech jobs throughout England and show you which counties are booming and which have just discovered the internet.

IT & Tech Jobs Advertised vs Population

Our first article in this series showed how a county’s population doesn’t always influence the number of jobs advertised. This is true for the engineering sector however does the same apply to IT & digital jobs across England? It certainly does! Looking at Yorkshire vs Hampshire, the largest county geographically holds over 4.5 million residents. The modest county of Hampshire is home to just 1.3 million. The larger and more Northern of the two presents 599 jobs vs Hampshire’s 602. If population was anything to go by we would expect Yorkshire to hold more than three times as many live tech jobs as Hampshire. Yet, this is not the case.

Berkshire is another that stands out where population vs live jobs does not follow the expected trends. With a population of 800,000 the small county boasts 547 live tech jobs on CV Library today (Wednesday 19th December).

It goes without saying Greater London again takes the top spot. With an 8,000,000+ population who can blame them? The capital however is currently home to almost a thousand less careers in IT than engineering jobs. This is surprising considering the city’s high rise makeup and number of tech companies residing here. Factors we must take into consideration too are staff turnover and typical salaries. When a company pays well, offers a variety of great benefits and looks after their staff, they are far less likely to advertise as often.

Overall, compared to the engineering sector, IT & Digital across the UK appears to be far less popular. As you can see in the comparison images below the peaks of engineering jobs advertised far outweigh those for IT jobs. With Herefordshire, Shropshire and Bristol across the English & Welsh border there’s large visible differences in numbers. The same applies to the East of England where Essex has almost 600 fewer IT careers than engineering with similarities in terms of range for most of the neighbouring counties. Where engineering only sees below 100 vacancies in two counties (Northumberland & Rutland), 14 counties have less than 100 IT careers currently live.

Surprisingly Northumberland takes the top spot for the lowest amount of jobs within the sector at a whopping 10! Rutland and the Isle of Wight aren’t too far behind. Followed closely by Durham, Cornwall and our home county Norfolk. The lesser popular regions for digital careers in England tend to spread across the west and north with the exception of Yorkshire lighting up like a beacon. But with just 599 IT jobs advertised for 4.5 million residents it’s nothing to really shout about. Hopefully this is seasonal and those who chose to sit behind a desk like to stay put during the festive part of the year. Maybe in the spring we’ll witness a few of England’s own Silicon Valley’s popping up on our maps.

A quick comparison – IT vs Engineering

When the two top five charts in each sector (IT & Engineering) are overlapped there is typically a 15-25% gap. Engineering being the more popular advertised industry compared to IT & digital jobs in England. Yorkshire of course being the exception here where you can see almost five times more engineering careers than IT & technology.

As mentioned previously in our research, population is not a complete reflection on the number of live vacancies. However when you compare the population chart to the engineering line you can see big similarities. Despite this there seems to be huge differences when comparing to the digital jobs chart.

As with our engineering job advertisement research we will be conducting the same review again in three months time. In the Spring of 2019 I believe we will see a much larger increase overall in the number of tech jobs advertised across the country. According to our most senior IT consultant Peter Campbell, this is not a reflection on the number of careers currently advertised.

I spoke to Jason Adams (i4 Recruitment Managing Director) and Peter, mentioned above, to hear their thoughts and predictions for the Spring of 2019:

Typically we would expect the market to slow down during the build up to Christmas and New Year. Is this the case?

Jason: The number of active jobs and vacancies haven’t slowed down however candidates seem to be a little preoccupied with their Christmas shopping at this time of the year. We do typically see a drop in application levels right before Christmas.

Between now and the end of March, where do you expect the market to peak?

Jason: January tends to start a little slower but we see a gradual pick up during the second and third weeks in the new year. The best calendar months of the year tend to be February and March so I expect to see a huge rise in application levels and vacancies filled during this time.

Are these trends apparent year on year or have there been drastic changes and exceptions?

Jason: This tends to be pretty standard year on year. Of course we see the odd change in live vacancies and applications but never anything too out of the ordinary.

Would you recommend employers to start looking prior to Christmas or in the new year?

Jason: I would always advise employers to get their vacancies ready before but expect the most activity after the festive period.

Finally what kind of increase or decrease should we expect to see in Norfolk and Suffolk IT careers advertised online by the end of March 2019?

Peter: Adverts online should double or triple at least. This however has no direct reflection on the number of live vacancies out there at present. It just shows that employers and recruiters seeking key members of staff are less likely to waste money on advertising when application levels are likely to be low.

Looking for a career in IT?

We have plenty of live vacancies at present, ranging from IT Support to Senior Software Engineers. Visit our jobs page to see the full job specs and use our quick apply feature.